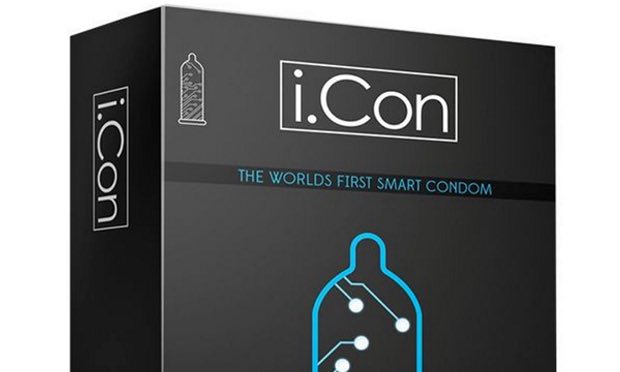 The smart condom has arrived.

Yep, scientists have created a “smart” condom that you can sync up to your smartphone, tablet and possibly your smart TV to track your sexual performance.

The Smart Condom: Say Hello To My Little (Bluetooth) Friend

Meet the i.Con Smart Condom billed stoically as “the future of wearable technology in the bedroom” by British Condoms, a UK company determined to take 21st century lovemaking somewhere it’s never been before.

And, honestly probably didn’t need to be.

The i.Con Smart Condom isn’t actually a condom at all.

The Smart Condom: Not Exactly What It Seems

It’s a plastic ring (think “pleasure enhancement device” like the products sold in skeevy 1970’s truck stop bathroom vending machines) that uses a “nano-chip” (British Condom’s phrase, not ours) to measure the amount of calories burned, session duration, speed, number of thrusts, and girth (WTF?) of your intimate sexual activities.

All of which can be uploaded to the British Condoms website, shared with strangers on the internet and even entered into an Excel spreadsheet to forward to co-workers or print out and pass around to family members at dinner next Thanksgiving.

The i.Con Smart Condom can also keep track of the number and frequency of  different sexual positions you use over a week, month or year. Probably even a decade if you regularly clean and take good care of it per the manufacturer’s specifications.

The Smart Condom: A Little Pricey

The unit (for your unit) retails for £59.99 on British Condom’s UK website. Which is about $75.00 USD, shipping price not included.

Seems like a lot of cash to spend on novelty item that you probably won’t use more than once or twice before growing bored with it or having your lovemaking partner abandon you for insisting on wearing it in the first place.

The Smart Condom: A Test Of True Love?

However, if you’re the adventurous type who’s constantly pushing the limits in your life, work, education, personal relationships, and digitally measured acts of sexual congress, then the i.Con Smart Condom might just be the device for you.

And if you can find someone who’ll still love you and agree to continue having sex with you while wearing this thing, hold onto them forever and never let them go. You’ll probably never find someone as understanding, non-judgmental or as laid-back about what their partner chooses to wear on their junk during sex ever again.